the inspo behind these sweet-and-sour roasted sprouts

I'm always on the hunt for a way to dress up brussels sprouts with a funky vinaigrette or sweet-and-sour sauce. I came across this recipe in Bon Appetit and tinkered with it how I see fit in order to reduce the sugar and make it slightly healthier.

Brussels sprouts have been on a popularity upswing since the early 2010s, mostly due to chefs and influencers incorporating them into recipes and on plates at restaurants. How many people, prior to the past few years, thought of brussels sprouts as a bitter, wierdly-textured tiny cabbage with few redeeming qualities? I'm sure many.

In the 1960s, Bontadelli estimates, about 7,000 acres of Brussels sprouts were being grown in California, mostly for frozen processing. That number fell to a low point of around 2,200 acres.

how to roast brussels sprouts and make them taste good

I'm pretty sure any time you slather any vegetable in sesame oil and roast on high heat for ~20 minutes, the outcome is good -- but these honey-vinegar roasted brussels sprouts are really good.

You're going to blast the brussels sprouts in the oven at 425F for about 20 minutes. Simultaneously, in a saucepan, make the honey-vinegar sauce.

When the brussels are all roasted, toss the sprouts with the honey-vinegar dressing. Sprinkle with sesame seeds and maldon salt, and serve! 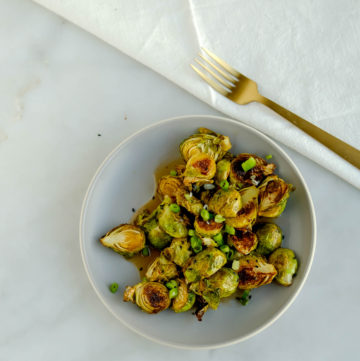