In anticipation of spring and all the wonderful vegetables, herbs and flavors re-emerging from the earth. Here's a recipe for a green goddess potato salad that's bursting with freshness. Make my green goddess dressing and marry that with new potatoes, asparagus, arugula and soft eggs -- heaven!

Before you start your green goddess potato salad

I have a couple of hacks for you in making this green goddess potato salad. First, flexing your #knifeskills, cut the potato into equal sized 1" cubes -- this will make it so the potatoes cook evenly.

Then, to cook the potatoes and the eggs, throw them all in salted boiling water AT THE SAME DAMN TIME -- they will both take exactly 8 minutes to cook. MULTITASKING!

When you take the eggs and potatoes out of the water, keep the water on - throw the asparagus in for about 2 minutes to blanch them.

Toss the potatoes, asparagus, arugula, eggs in some green goddess dressing and have yourself a snack. 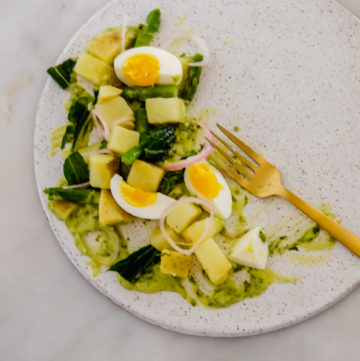