Here's a recipe for a Mexican flavors-inspired watermelon salad. It has watermelon, radish, cotija, and lime in it -- super refreshing for a summer dinner or picnic. The recipe is very scalable and can be made for as little as 2 hungry people and as many as you want.

The watermelon's gastronomic history and use in Mexican cuisine

The watermelon originated in West Africa, and we see references to the watermelon in ancient texts. The Roman naturalist, Pliny the Elder, described the watermelon as a refrigerant maxime—an "extremely cooling food"—in his first-century encyclopedia, Historia Naturalis. Because the watermelon has such a high water content percentage, it served as a hydration source for peoples in the desert. Also, if stored in a cool/dry place, could stay edible for weeks to months.

The watermelon reached Southern Europe via the Moors, where the warm weather in the south of Spain allows the crop to flourish. European colonists and African slaves brought the berry (yeah.. it's technically a berry) to the New World. It's reported that watermelons were cultivated in Florida and warmer/southern regions as early as the 16th century.

In addition, it's worth noting that here in the US, watermelons were grown by free Black people in the 19th century, and were a symbol of slavery abolition.

Now, Mexico is the #2 exporter of watermelons in the world. Watermelons have a unique place in Mexican culinary history. Moreover, because the colors of the watermelon (green, white, and red) are the same as the Mexican flag (green, white, red), el tricolor represents a sense of Mexican pride and nationalism.

Now we see a lot of watermelon centric recipes in Mexican cuisine center on it being paired with a slightly savory spice like Tajin, or watermelon being distilled into an agua fresca.

What makes this watermelon salad recipe so good

This watermelon salad recipe is....

How to make a Mexican inspired watermelon salad

This recipe is honestly barely a recipe, haha. Here's what you need to make a Mexican inspired watermelon salad, for about 4 people:

Finally, toss and combine on a platter. That's it! 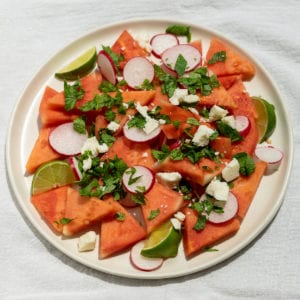 Feel free to substitute in jicama