the inspiration behind this bacon, kale and hashbrown egg bake

I’m definitely a savory-for-breakfast girl. If I have a waffle or pancake for breakfast, count me out for the rest of the day. I really need a blast of protein in the morning in order to concentrate and perform at my best. If I have time, I’ll make myself some savory oatmeal, or fry an egg and put it on a slice of sourdough with some Frank’s Red Hot sauce sprinkled on top. Or, if I’m either cooking for a group or want to live my best life and meal plan breakfast for the week, I’ll do a big frittata or egg bake like this to really get my week off to a good start.

I wanted to share one of my favorite breakfast meal preps with y’all since breakfast is one of the easiest meals to prep for, and one that I know at least I don’t go crazy if I’m eating the same thing every day for.

how to make a breakfast meal prep: try a bacon, kale and hashbrown egg bake !

My biggest small victory in making this dish that I want to impart with you all is that when you cook bacon, start with a COLD SKILLET. For this bacon, kale and hashbrown egg bake, you need to make the bacon separately from the rest of the egg bake. Slice the bacon strips into 1″ cubes and throw them into a COLD SKILLET. Then, as you heat the skillet, the bacon fat renders out and the bacon cooks more evenly. And, SAVE YA BACON FAT! That shit is gold.

From there, you’re going to assemble the egg bake. Throw the frozen hashbrowns into the bottom of your casserole dish. (I use this one!) Nope, don’t need to defrost them. Mix up your eggs with the seasonings, and pour over the potatoes.

Throw the medium-done bacon and your chopped kale on top, and then toss the whole thing into the oven for about 30 min at 350F. I don’t like super dry eggs, so I keep the egg bake a little jiggly on top. But that’s up to you.

Hope you love this bacon, kale and hashbrown egg bake!!! It’s perfect as a breakfast meal prep or as brunch for a crowd. 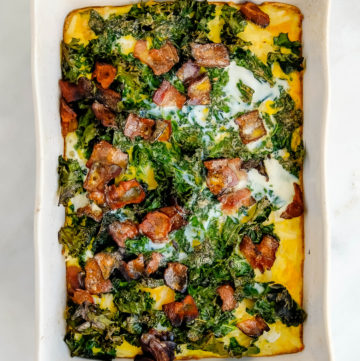