Is a margarita low carb?

A regular keto margarita has tequila, triple sec, lime juice, and sometimes an extra splash of simple syrup. That is how a nice bar would make a margarita -- Lord knows what is in bottled margarita mix!! So no, a regular margarita is not low carb.

The ingredients in a traditional margarita that trip up a lower carb plan are the triple sec and the simple syrup -- both of which are super sugary and a total no-go on a low carb or keto or paleo plan.

However, tequila does not have carbs, and lime juice is fairly low sugar, all things considered.

So, my keto margarita recipe tactic is to forget the triple sec, and to sweeten the drink by making a keto simple syrup using ½ cup of Swerve + ½ cup water, and to basically make a boozy limeade.

The origins of the margarita

As with so many popular things, more than one person has claimed to have invented the margarita drink. Smithsonian details the history of the marg on their site:

One of the most prevalent stories is that Carlos "Danny" Herrera developed the drink at his Tijuana-area restaurant, Rancho La Gloria, around 1938. As the legend goes, Herrera dreamed up the cocktail for one of his customers, an aspiring actress named Marjorie King who was allergic to all hard alcohol other than tequila. To make the liquor more palatable to his fussy client, he combined the elements of a traditional tequila shot—a lick of salt and a wedge of lime—and turned them into a refreshing drink.

Another top contender for the inventor title is Margarita Sames, a wealthy Dallas socialite who claimed she whipped up the drink for friends at her Acapulco vacation home in 1948. Among her well-connected guests was Tommy Hilton, who eventually added the drink to the bar menu at his hotel chain.

How to make a keto margarita

Step zero is to make a keto simple syrup using a 1:1 ratio of Swerve sugar to water. I used ½ cup Swerve granulated sugar and ½ cup water, which yields about ¾ cup of simple syrup, but we are only using about 1 fluid ounce in the recipe. Simply mix the Swerve and the water in a saucepan, bring to a boil and watch to make sure the sugar is dissolved completely. Then pour into a jar and let it cool. It will last in your fridge for a very long time, so you can re-use it for a while!

To make 2 servings of this keto margarita, you will need

To do a Tajin or salt rim, take a wedge of lime and run it around the rim of a glass. Dip the glass into your kosher salt or Tajin. Put ice into each glass and set aside.

In a cocktail shaker, add a few ice cubes, tequila, lime juice, and simple syrup, and shake it all up. Strain it over the ice in your prepared glass.

Finish with an extra lime wedge and serve. Tada! This keto margarita recipe is ready and done. 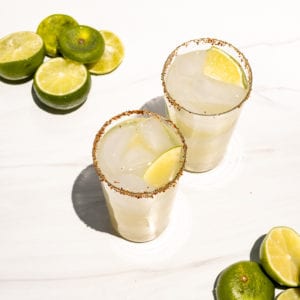 Store the leftover Swerve simple syrup in the cupboard, not the fridge. It will last for about a week.