Here's a recipe for a rhubarb compote that is lower in sugar but maintains that delicious sweet-tart balance that rhubarb is known for. Using just water, rhubarb, and sugar or a sugar substitute, this rhubarb compote recipe is ready in about 20 minutes and is delicious with yogurt, ice cream, on toast, or as a chutney of sorts with pork chops or chicken.

Rhubarb is a stalky vegetable that looks like a pink cousin of celery. It's famously tart (or sour? i never know the difference between tart or sour.)

Rhubarb appears for a few weeks in the springtime, normally around late April/early May. Same time as ramp season! (Rhubarb and ramps! My favs!)

You'll want to buy rhubarb that is firm with crisp stalks. Again, like celery, nobody likes a flaccid rhubarb. (Sorry, I went there.) You also want to make sure the leaves (if they’re attached) appear fresh and not wilted. And don't eat the leaves! The leaves are poison. Just chop those off and throw in the trash or compost.

You can store rhubarb in the refrigerator for up to one week. I just wrap in a paper towel and store it in a Ziploc, like celery. Or you can chop it up, and store it in the freezer.

Rhubarb compote - how to make it

To make a rhubarb compote, combine 2 lbs of chopped rhubarb with a ½ cup of sugar -- use Swerve granulated sugar if you're doing keto -- and a ¼ cup of water. Optional would be a squeeze of orange or a bit of orange peel/zest if you have it, no worries if not. Simmer for 20 minutes, until it's broken down. Let it cool, then store in a jar. You'll need two 12-oz jars for it all to fit.

Another option would be to straight the rhubarb before you store in a jar, and use that leftover simple syrup for a rhubarb cocktail.

Enjoy with yogurt, ice cream, toast, as a chutney of sorts with a grilled pork chop perhaps, or just by the spoonful!!! 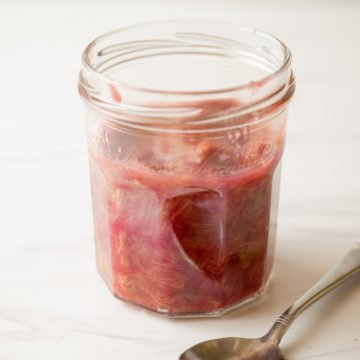