Here's a recipe for chai blondies that are vegan, using coconut oil and a flax egg to bake them. They are scented with a warming chai spice -  a mixture of cinnamon, nutmeg, cloves, and anise. This vegan blondie recipe is amazing!

the inspiration behind this vegan blondie recipe

I love baking with chai spice -- a spice blend inspired by the spicy, warm flavors of "chai" tea. (Yes, I know that chai means tea, so chai tea = tea tea.)

I was curious how to make a healthy-ish blondie recipe, so I tinkered with a classic family blondie recipe with some plant-based substitutions like coconut oil and flax eggs to come up with this vegan blondie recipe.

This recipe is easily the most popular recipe on my website!

When baking, often you're using butter as a means of hydrating and flavoring whatever dough you're making. Butter can be substituted in vegan baking for a number of things:

Try to substitute volume or weight as best as you can, and do solid for solid or liquid for liquid. That means, if the recipe calls for 1 stick of butter, cold and cubed, 1 stick of butter is ½ cup, so substitute in ½ cup of cold coconut oil or Miyoko's vegan butter, cold and cubed. Alternatively, if the recipe calls for melted butter, use melted coconut oil.

Another culprit in baking - and trying to bake vegan things - are eggs. A great substitute for an egg in vegan baking is flax eggs. 1 flax egg = 1 large egg. You make a flax egg by combining 1 tablespoon of ground flaxseed with 2 tablespoons of cold water, and stir the two together until they are gelatinous. A bonus of using a flax egg in this vegan blondie recipe is that it adds fiber!

Vegan baking is totally doable with some smart substitutions.

how to make vegan chai blondies

Preheat the oven to 350F and line an 8x8" baking pan with parchment paper, and spray it with a little baking spray to ensure it all doesn't stick to the sides.

As with all baking, you're going to prep your dry ingredients and your wet ingredients separately.

Mix together 2 cups of flour, 1 tablespoon of chai spices, and 1 teaspoon of baking powder in a bowl off to the side. I like to use a whisk to combine all the dry ingredients all together.

Then in the bowl of a stand mixer or in a second bowl with a handheld mixer, you cream just over 1 cup of melted coconut oil and ¾ cups of sugar (or Swerve) together, then add in the flax eggs and vanilla. I like vanilla bean paste here, because it infuses more vanilla flavor into this vegan blondie recipe.

Then combine the two, and pop into your 8x8" pan. For me, every time I have tested this recipe, the blondie dough looks fairly crumbly - almost like cookie dough - and I use my fingers to press the dough into the pan.

If you liked these, check out some other chai recipes cooked up here! 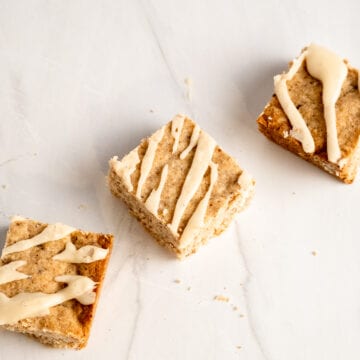 If you want to make regular chai blondies, you can use 2 eggs and 1 cup of melted butter.