This recipe for brioche donuts is decadent and a true treat. If you're looking to flex your brioche-making skills as well as get more comfortable with frying, this is the recipe to take on. You can do any flavor of jam, curd or pastry cream you want to fill, or leave them plain!

the inspo behind these beauties

Fresh, brioche donuts are heavenly. The first time I had a donut that was yeast-risen was at Leonard's malasadas in Honolulu, and it was mind-blowing -- their's are a Portuguese donut, and they are simultaneously light and rich -- and Leonard's keeps it simple with only custard, haupia, or chocolate fillings. A few years later, I got to re-create this magical moment of having a perfect yeast-risen donut when  General Porpoise opened in Seattle. General Porpoise sells not-too-sweet, springy, chewy, perfect jelly and cream-filled donuts. (Heads up if you're in Seattle, they sell out by noontime without fail, so go early!)

Yeast and frying are two of my baking/cooking fears -- I always mess up yeasted bread and frying just seems overwhelming. In order to face my fears of yeast and frying, and have brioche doughnuts on-demand, I set out to find a copycat recipe. In an interview with General Porpoise's owner, Renee Erickson, she said the team styled their donut recipe off of an English-style custard filled donut. This led me down a rabbit hole of English style donuts, and I finally found a recipe for custard donuts, which seemed close to what I recall general porpoise's donuts' quality to be, and from which this recipe is adapted.

how to make brioche donuts

start this project the afternoon/evening before (yes the day before) you want to eat donuts.

the first thing you'll do is hydrate a single packet of yeast with ¼ cup of warm (110-130F) water and ½ teaspoon of sugar. let the yeast mixture double in size.

then, you'll make the brioche dough. mix all the ingredients EXCEPT the butter -- so yeast, flour, sugar, salt, water, eggs - in a mixer with a dough hook. it will look yellow and eggy at first, but will come together. if it's looking a little too loose after 5 minutes, add a tablespoon of bread flour to tighten it up.

then add in butter piece by piece so it incorporates and mix it all together. (specific mixing times below).

proof the dough first by letting the dough rise in the mixing bowl, doubling in size. then punch it down, cover, and throw it in the fridge overnight. 5 hours before you want to eat the brioche donuts, wake up and take the dough out the fridge and divide into small handful size portions of dough and let rise on a FLOURED baking sheet, not touching. let them rise for another 3-4 hours.

to cook, heat up canola oil to 350F. gently take 3-4 dough balls at a time and fry, giving it a minute or so on each side. let them cool slightly and then toss in more caster sugar. 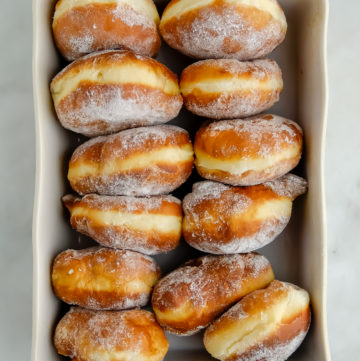